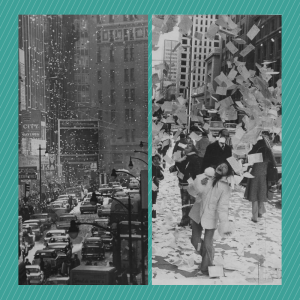 Herb Caen once wrote that he would stroll downtown and witness “…a custom observed nowhere else.” Later he would add that throwing the entire calendar, as a whole, out the window would be “bad form” as someone might bring in the New Year with a bad migraine, or worse. END_OF_DOCUMENT_TOKEN_TO_BE_REPLACED

We strolled down an aisle named Normandy Lane. A make-believe village soon engulfed us. A well-groomed gentleman, wearing a white carnation in his lapel, stood behind a bar, which resembled a red lacquered bed. We soon arrived at a red, white and blue kiosk displaying children’s books and French magazines. END_OF_DOCUMENT_TOKEN_TO_BE_REPLACED

Listening to the radio, you eavesdropped on Happy Holly’s conversation with Santa and tracked his movements with Rudolph and the other reindeer as all dashed from the North Pole and soared toward San Francisco. Without warning, Dad turned off the ignition and escorted everyone toward a magical toy store. You strolled a block from Union Square to Stockton and O’Farrell where a human toy soldier, dressed in a tall purple hat, greeted you with a stiff wave before your family entered FAO Schwarz (located in S.F. since the late 1960’s). Oversized stuffed animals showed their stitched grins along with Humpty Dumpty who sat with an uncertain expression on a rung of a giant tower, which stretched to the second floor. END_OF_DOCUMENT_TOKEN_TO_BE_REPLACED

Do you remember the Christmas parade rolling along Market Street in downtown San Francisco? As a tot, you were mesmerized as Santa slithered out of his sleigh and wobbled into the Emporium. In a dash, you sped from the cable car turnaround across the street at Powell and rushed passed sidewalk street artists and a good-news prophet who held up sandwich board that read: “Fallen, Fallen is Babylon the Great”. Once inside the seven-story neoclassic structure, the centuries old department store (built in 1896) came alive with a self-promoting tune. An orchestra, situated on a spherical platform above a dining area, bellowed out the “Emporium March” to get your parents and grandma in the capitalistic mood. But grandma wouldn’t have it, complaining “what kind of Santa would be found south of Market?” END_OF_DOCUMENT_TOKEN_TO_BE_REPLACED

Christmas Past in San Francisco usually started with the task of locating a parking place in the Union Square underground garage. Once successful, the family would climb hand-in-hand up and out of the gray asphalt hole to a magical fairyland. You took in the outfits of the other children and realized why your mother insisted on everyone wearing their “Sunday” best. Dad wore his ugly Santa tie, mom her feathered hat with matching colored gloves, while you donned that Fauntleroy-like velvet suit with lace collar hand-knitted by grandma. White lights illuminated the giant X’mas tree, which stood proudly near a 25-foot menorah (first sponsored by Bill Graham in 1975). END_OF_DOCUMENT_TOKEN_TO_BE_REPLACED

Let’s take a trip back to Christmas in 1880’s San Francisco. It is interesting to note during this season of divisiveness that three quarters of the population of the City were first generation immigrants. They brought some wonderful traditions that are still with us today. The influx of Irish changed the major holiday of the year from the Protestant promoted Thanksgiving to Christmas. The folks from Ireland (largest group of immigrants to S.F. in 1880), many of whom settled in what is now present-day Mission District, started the custom of putting out cookies and milk (or was it Baileys Irish Cream) for Santa on Christmas Eve. This was based on the practice of leaving the front door open so that Mary and Joseph could enter and find a beverage and sweet bread on their journey to Bethlehem. END_OF_DOCUMENT_TOKEN_TO_BE_REPLACED 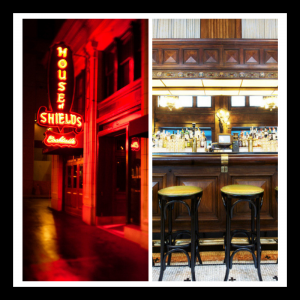 When America went dry during Prohibition, San Francisco simply went underground, digging secret tunnels. The House of Shields was established in 1908 and is presently located at 39 New Montgomery St. As you enter under an alluring neon sign right out of a Bogie movie, you saunter across a mosaic tiled floor to a grand bar. Textured panels and columns that adorn it provide a reassuring sturdiness that fits the bar’s authenticity. A thick bar rail, flat stools, paneled walls, and dark booths confirm the fact that yes, this is a real, historic tavern. To gain access to bootleg whiskey (as well as women) during Prohibition, a tunnel was built connecting the laundry room of the Palace Hotel to the above establishment, which was across the street. The House of Shields was a former gentlemen’s club where women were not allowed until 1976. END_OF_DOCUMENT_TOKEN_TO_BE_REPLACED

Here are a couple of San Francisco restaurants of yesteryear that I wish were still with us.  The Shadows on Telegraph Hill was formerly located at 1349 Montgomery Street.  Maybe you couldn’t afford to take your sweetheart to Julius Castle down the street, but at the Shadows a sawbuck would land you a classy dish from their extensive German-Swiss-Continental menu.  My date selected hasenpfeffer, a stew made from marinated rabbit.  Another patron approached and complained about her eating the “nice, fussy” animal.  The chef stormed out of the kitchen and lectured the person on the history of his favorite cuisine. After dinner, we relaxed by the bar in the Swiss chalet room, drinking our sweet-and-sour cocktails while gazing out the picture window to the Bay Bridge and beyond.  A romantic adventure led us across the street to the nearby Filbert Steps where I stole a kiss from my date to the background music of wild parrots. END_OF_DOCUMENT_TOKEN_TO_BE_REPLACED