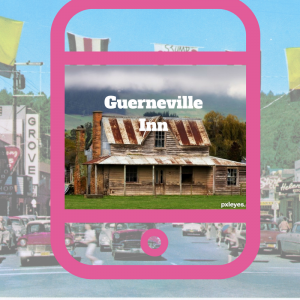 On another occasion, a husband comes in and spies his wife accepting a drink from a stranger.  An argument ensued between the husband and stranger.  The wife tries to calm the pair, saying there was plenty of her to go around.

The husband, however, takes exception to this and leaves.  He soon returns and shoots the stranger dead.  Where there is love, you’ll find Satan.

The Guerneville Inn ended its infamous run in a fireball when a propane tank ignited.  A couple of suspicious looking rubes were spotted fleeing the restaurant, wearing Lyndon B. Johnson masks, moments before the explosion.  The sheriff stopped a delivery van along the strip for a broken taillight.  Inside were found the disguises as well as several paintings of naked ladies that were stolen from the joint.  Swindlers nor thieves shall inhearite the Kingdom, so says the Preacher.