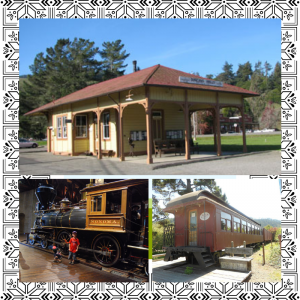 The NPC developed into the North Shore Railroad (NSR) that later became part of the North Western Pacific (NWP). The depot (upper photo) was erected in 1907 and restored in 1971.

Standing nearby today on narrow-gauge tracks (36″) are the restored NWP coach, two box cars and Caboose #2 (lower right photo), which was part of the last train to Duncans Mills in 1935.   Old No. 12, dubbed the Sonoma (lower left photo), spilled steam from its stack while hauling as many as thirteen cars on a single run (Sonoma is housed at the railroad museum in Sacramento).

During the 1906 earthquake, Duncans Mills lost its three Victorian hotels. Essentially the entire village was destroyed and left to the sprouting weeds for years to come. Not too soon after the town rose from the ashes, Mother Nature dealt another cruel blow.  On September 17, 1923 a moonshine still blew up, igniting a blaze that roared through the lumber mills from Guerneville through Cazadero and Duncans Mills to Jenner.  But the good citizens of Duncans Mills carried on.  With the lumber trade on the fritz, passenger service picked up the slack over a standard gauge track (56″).  Service existed to and from Duncans Mills with a daily patron average of nearly 225. The NWP offered “dollar days” on the weekend with a roundtrip fare of $1.25 from San Francisco to any point along the Russian River.  And then the Depression arrived in earnest to challenge the town once again.  With the railroad running over a million dollars in the red, the town slowly faded until a 1976 restoration project, associated with the celebration of the U.S. Bicentennial, brought about a period of building restoration. It’s seems as though these Duncans Mills folks don’t want to surrender.  A hardy breed for sure.