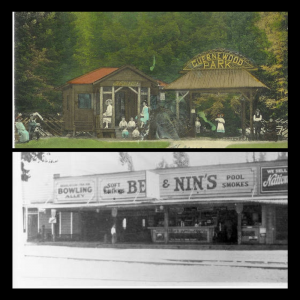 George Guerne, a Swiss immigrant who in 1870 had Stumptown (Guerneville) renamed in his honor, purchased adjoining parcels, which became known as Guernewood Park.  The top photo (1920’s) shows the entrance to the area, which was located where the empty lot is today next to the Dubrava complex.  This was the largest resort along the Russian River at the time, comprising almost 15 acres. When the last train pulled out from the station in 1935, auto routes experienced heavy traffic.  The dirt road down Pocket Canyon was asphalted in ’29, the concrete for which came for the old sand and gravel plant that was just downstream from the Odd Fellows Bridge (you can still see remnants of the piers there today).  Another route was across the Monte Rio Bridge.  The original one was constructed around 1915 at a cost of $25,000, which was replaced in 1934 by the current span.

In later years, a building housed various businesses in front of the Guernewood Park Tavern and beach entrance (not shown).  The bottom photo depicts the 1947 structure with its grocery store, bakery, Sportsmen’s Club bar, and restaurant.   Ben Larner remembers that his grandfather and father (Rip Larner) ran the butcher shop inside the grocery store.  Sam Sirdofsky recalls the dentist office across the old Highway 12 from the grocery store where the half-blind Dr. Papov worked on Sam, his teeth chattering with every slip of the drill.  Sam was allowed to work off the expenses for some bad  dentistry by building models for the doc’s mini-golf course, which stood where the childcare center is today.  Pam Copple managed the miniature golf course from 1959-1965.

For more memories of the area, scroll to the bottom of this page and click on “Guernewood Park”.  Note: the area is featured in Stumptown Daze, a romance-comedy novel that takes place in 1960.  For reviews, sample chapters, etc, click on “Novels” at the top.  Enjoy!