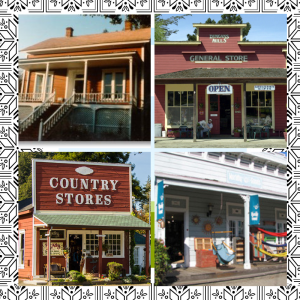 On the flats you can still see DeCarly’s old General Store (upper right photo), built in 1888. For over one hundred and thirty years, the store has met the varied needs of the town’s 170 residents.

A few steps away is another historic building.  Country Stores (lower left photo) features Pig Alley, Jim & Willy’s, and Quercia Gallery. The structure dates back to 1876 when it served as a hotel and livery stable, constructed by Christopher de Quien who was a former Pony Express rider in Louisiana before settling in Duncans Mills. The hotel accommodated the musicians, tourists, investors, artists and vacationers that came in daily on the rails. The livery stable rented horses as well as providing stagecoach service up the coast as far as Fort Bragg.   Of French royalty, the lad had style but left town when the locals bastardized his name to “Queen”.

Worldly Goods (lower right photo) is located nearby and occupies the space of the former John Orr’s Saloon, which provided distilled spirits to the town’s first inhabitants in the late 19th century.   Orr purchased a section of the Muniz Rancho land grant and soon established what was then the premier saloon north of San Francisco.  HAPPY THANKSGIVING