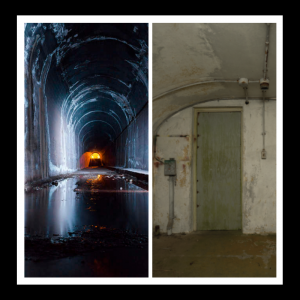 A second W.W.II underground bunker in the City was featured on The History Channel in 2009.  The series, Cities of the Underworld, told in one episode of classified military headquarters beneath San Francisco.   A fifteen-foot long tunnel led to the edge of a hundred-foot man-made cement cliff. A metal ladder, pounded into the concrete wall, took one downward to a military complex.  Hidden far below the city’s surface were a series of ballroom-size caverns, tunnels and smaller rooms (right photo) that once existed in a long-forgotten era. The History Channel show initiated a flood of curiosity seekers.  The authorities eventually discovered the hidden entrance and shut it down not too long after it aired.