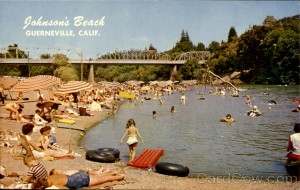 As a fourth generation City kid, this is where my parents took my sisters and me to escape the bitter July fog atop Market Street.   Mark Twain’s quote still applies today: “The coldest winter I ever spent was a summer in San Francisco.”  What a relief it was back in the sixties to know that the sun did indeed appear beyond the rainbow of Marin County’s Waldo Tunnel.  END_OF_DOCUMENT_TOKEN_TO_BE_REPLACED