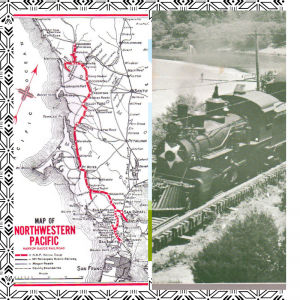 It appears that the Russian River resorts reached a tipping point in the summer of 1910 when there was a jump in the number of visitors. It was the first season after the Northwestern Pacific (NWP) line finally connected with the narrow gauge railway coming up the coast. This meant someone in San Francisco could easily reach the popular resorts on the west end of the Russian River. No longer was it necessary to board the San Francisco and North Pacific Railroad (SFNP) to Fulton near Santa Rosa and transfer to a slooooow connection that crawled as it made over a dozen stops along the way including Dell, Hilton, Eagle Nest, Guerneville, Montesano, and Camp Vacation near today’s Northwood. From there a determined soul would have to board the seventy-five-foot stern wheeler, the Monte Rio, in order to travel further downstream.

Getting to the River:

The coast route (map on left) took you through Fairfax, Tomales Bay, Valley Ford, Freestone, Occidental, Camp Meeker and onto Monte Rio where it continued down today’s Moscow Road (photo on right). From there it connected with Mesa Grande (Villa Grande) before going onto Duncans Mills and beyond.  This coastal trip was quite the adventure, rumbling through five different tunnels and over sixty-nine trestles. Two engines could pull as many as thirteen cars including open-end platform types, enclosed passenger coaches, smokers’ car, baggage and mail, second-class couches, picnic and hunters’ cars, students’ car, and a caboose. Next time we will visit one of the more infamous train wrecks of the NWP, which occurred just west of today’s Villa Grande.