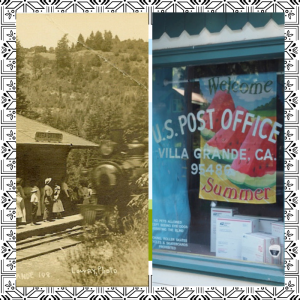 Unfortunately, there was another Mesa Grande located in the San Diego area, necessitating a name change. The post office operated under the new moniker of “Grandville”, doing business out of a cubbyhole in the general store.

What’s in a Name?

However, do to confusion with Grandeville in Tulare County, there was yet another adjustment. With a bit of linguistic trickery, “Grandville” was turned inside out to become “Villa Grande” and has remained such since 1921. In 1973, the post office was moved to the garage/workshop area of the general store owner’s private residence in order to create a private lobby and additional mailboxes.   It has remained at this site every since.  Sidebar: In 2012 there were post office closures up and down California. It was decided to keep open the venue in Villa Grande.