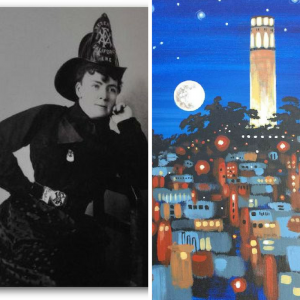 The intention of the Coit Tower design is still debated today. Many argue that it mirrors the image of a fire nozzle, but there are others who hold a much different opinion. Alfred Hitchcock insisted that Coit Tower be visible from his lead actor’s (played by Jimmy Stewart, co-starring Kim Novak) boudoir in the movie Vertigo. When asked why, the director simply said because “It’s a phallic symbol,” and he showed a rare grin.   As a devout sinner, I prefer the later version.  What’s your take on it?  Next post, we’ll look at the murals inside Coit Tower.