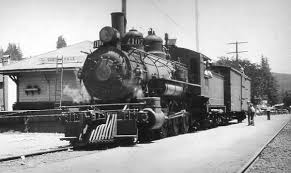 “All Aboard for the Russian River” was a familiar call back in the day.  It must have been a thrilling sight when the Northwestern Pacific R.R. pulled into Guerneville along the Russian River.  The route began in 1876 and reached its peek in 1926 with 14,000 passengers on a summer weekend (30,000 on 4th of July).  After paying your round-trip fare of $1.25, you would board a ferry at the foot of Market Street in San Francisco for Sausalito.  From there you might do the “Triangle Trip”.

The Northwestern Pacific R.R. would provide a first class smoker coach or perhaps a second class car where you might not mind a few non-smokers in attendance.  In addition, the passenger train would haul a baggage and mail car, a picnic car, a hunter’s car (where the unpleasant aromas of fresh kills could fester) and a caboose. It might be No. 13 (a 4-6-0 engine capable of handling 13 cars), that would take you on your five-hour journey thru San Anselmo to the coast and Pt. Reyes and Valley Ford.  From there you would cut inland to Freestone and cross the largest man-made structure west of the Mississippi–the Brown Canyon Trestle that stood over two hundred and fifty feet tall and over five hundred feet long.  After leaving Howard’s Station (now Occidental), you’d traverse Dutch Bill Creek and go through a tunnel (above where the fish ladder is today) and enter Monte Rio and the Russian River.  Next you would travel down present day Moscow Rd to Duncan Mills and Cazadero.

The weekend provided sunbathing along the banks of the Russian River while at night you could swing to the music of the Big Bands at one of six dance halls.  For a little variety, upon your return trip you could continue onto Guerneville, Santa Rosa, Petaluma, San Rafael and finally to Sausalito to catch the ferry back to the City.

During the depression, the business side of the ledger was down to a trickle.  The last train out of Guerneville was Thursday, November 14, 1935.  Women wept while men took the ceremonial free ride with offerings of unlimited booze on board.  It marked the end of an era.