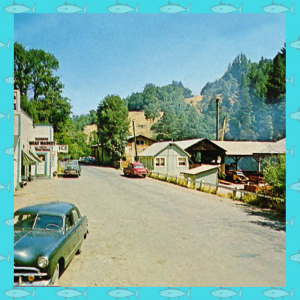 The story of Berry’s Mill and Lumberyard began in the early 1940s. Prior to that, twenty-year-old Loren Berry and his father Merrill were working as loggers in the small town of Cazadero, California. The family had been living there since 1886 when Merrill’s father-in-law, George Montgomery, bought the town of Ingrams and renamed it Cazadero. In 1941 Merrill and his son began the downtown sawmill on the former NWP railroad depot site across the street from the General Store and the Post Office.

In those days, logging was done in and near Cazadero to convert forests to grazing land. A few years later during World War II, Berry’s Sawmill and Lumberyard supplied the big beams used at Guerneville’s Mount Jackson mine (abandoned in1970 due to high levels of mercury). There was a thriving business in quicksilver, which was required to detonate artillery shells on battleships.

When Berry’s sawmill outgrew the site, the machinery was dismantled and moved six miles down the road to its present location on 32 acres along Highway 116 where Jim and Bruce (Loren Berry’s sons) carried on the family enterprise.  The business continued to prosper until one night in 1989.  The town was awakened by news of a fire at the mill, which was not an uncommon occurrence. But this was no pissant affair. In the darkness, the sky raged orange for miles. Flames engulfed the entire mill. Twenty-four-inch steel support beams sagged under the intense heat. The sawmill that had operated since 1941 was gone. The community, however, came together to rebuild Berry’s Mill and Lumberyard. Six months later, the familiar buzz of the saws was heard once again. The business evidently has run its course and is presently on the market for nine million dollars.