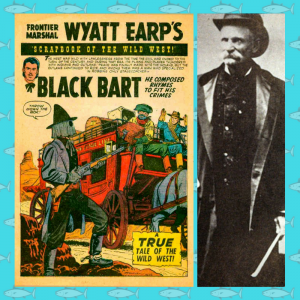 Black Bart (Charles Boles) robbed the Wells Fargo & Co. stage coaches on twenty-nine different occasions.  Two of these holdups were near the Russian River.  One was just west of the town of Duncans Mills and the second was north of Jenner at Meyers Grade on August 3, 1877.  Black Bart made his demands in a civil, gentlemanly manner with a “Please throw down the box” and a double-barreled shotgun.  He tucked away the $300 in cash and tossed the following poem into the strongbox: “I’ve labored long and hard for bread / For honor and for riches / But on my corns too long you’ve tread / You fine-haired sons of bitches.” It is said that he hid out that night at a barn (the refurbished version can be seen on present-day Hwy. 116 at Sheridan Ranch) before heading into Guerneville.  A handkerchief he left behind with a laundry mark led to his ultimate downfall.  Charles Boles served over four years in San Quentin Prison before being released in 1888.

Upon his release, Black Bart was asked if he would rob stages again. He said no.  The reporter continued and queried whether or not the infamous poet had any more verses up his sleeve.  His response was: “Young man, didn’t you hear me say that I wasn’t going to commit anymore crimes?”

Two brothers, George and John Gorton of Cazadero thought they would take advantage of the situation.  George stopped the Wells Fargo stage along the Point Arena-Duncans Mills line.  George copied Bart’s style with his gracious manners and poetic voice while John hid in the trees.   The Gortons knew of Black Bart’s release date and tried to shift the blame to him.  Their charade failed and they were caught in Kansas on February 15, 1889.