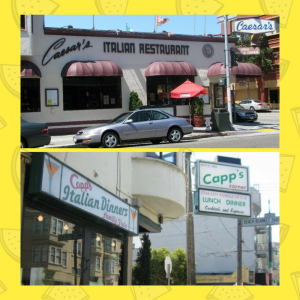 Caesar’s restaurant closed in 2012 after 56 years in operation.  The Italian eatery in North Beach was formerly at 2299 Powell Street at Bay.  That was the place for a special celebration whether it be a birthday, anniversary or the opening of mushroom season.  Didn’t matter.  It had the IT factor with waiters in tuxedos.   Could you finish the seven-course dinner?  Did you ever try their pig’s feet as an appetizer?  “Eat where the Italians eat” was their motto. The only thing better than the Cioppino was the smiling face of the late Luigi Romani.