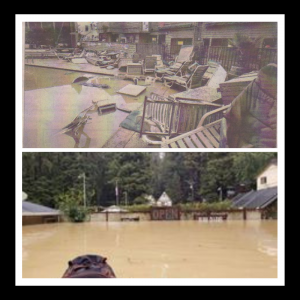 “It will be a total gut job and renovation,” Bridges said.  “But it will reopen bigger, better and more sparkly than before.”  Such is the uplifting attitude and familiar refrain from many who are determined to thumb their nose at the rebellious Russian River in exchange for a slice of paradise. END_OF_DOCUMENT_TOKEN_TO_BE_REPLACED 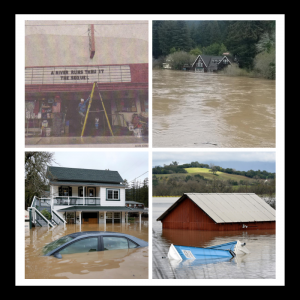 God only knows how many times the Highland Dell Hotel in Monte Rio (upper right photo) has been inundated since its inception in 1910.  Records state nine such incidents have occurred, but there have been several times when rain gauges have been swept away or damaged beyond useful.  Its beautiful lobby, bar, and dining area are under three feet of water.  We wish Herb and Ingrid a quick recovery. END_OF_DOCUMENT_TOKEN_TO_BE_REPLACED 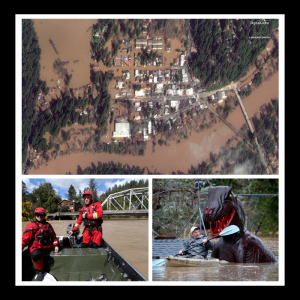 At 41.5 feet, True Value hardware, Napa Auto Parts and Stumptown Brewery along the strip between Guerneville and Rio Nido had already accumulated over a foot of water. END_OF_DOCUMENT_TOKEN_TO_BE_REPLACED 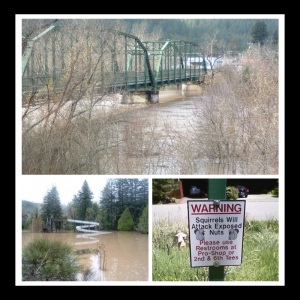 At the Northwood Golf Course in Monte Rio, a sign warns visitors what will happen if they do not use the “proper” facility (lower right photo).  Perhaps a certain New Year’s Eve reveler should have taken this as an omen.  A visitor to the area, he had rented both a vehicle and a house to celebrate the incoming of 2006.  But heavy rains blocked Redwood Drive, which ran to the lower reaches of the course.  Wanting desperately to feel the warmth of his cabin after an arduous night of bar hopping, the man motored past the second tee box, around the restrooms and started down the cart path, cruising parallel to the fifth fairway. END_OF_DOCUMENT_TOKEN_TO_BE_REPLACED 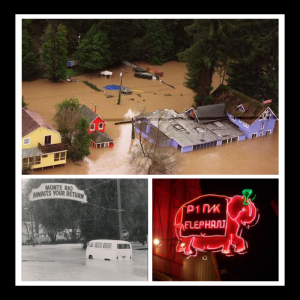 The torrent brought both sadness and humor to the scene. One story relates how the Pink Elephant saloon in Monte Rio kept its doors open despite the presence of three feet of muddy water. Patrons continued to play a game of pool while in their canoes. Others sipped whiskies, feet dangling from bar stools into the river as if it was just another day in paradise. END_OF_DOCUMENT_TOKEN_TO_BE_REPLACED 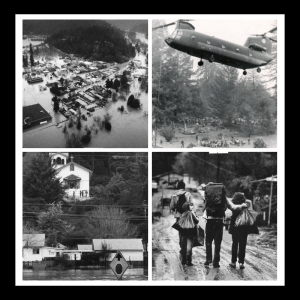 Evacuees were offered temporary shelter at the Veterans Memorial Building in downtown Guerneville, though it was abandoned when water crept too close. The shelter was then moved to St. Hubert’s Hall off Armstrong Woods Road and then to a higher elevation, St. Elizabeth’s Catholic Church. END_OF_DOCUMENT_TOKEN_TO_BE_REPLACED 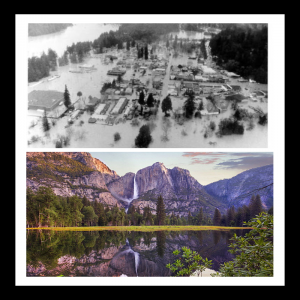 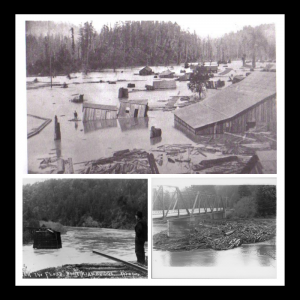 The lower left photo pictures the 1907 flood where it destroyed the Bohemian Bridge.  It is uncertain if this was the pedestrian bridge or the railroad trestle.  The later delivered San Francisco Bohemians from where the ninth tee box is today at Northwood Golf Course (built in 1928) to the top of a granite bluff & into the Grove. END_OF_DOCUMENT_TOKEN_TO_BE_REPLACED 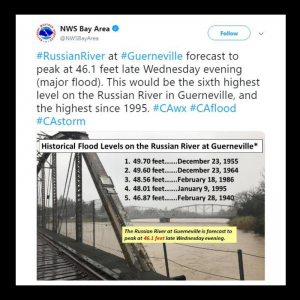 The Russian River is 110 miles in length with its headwaters north of Ukiah and flows thru Alexander Valley, which was transformed last week into a six-foot-deep lake. END_OF_DOCUMENT_TOKEN_TO_BE_REPLACED