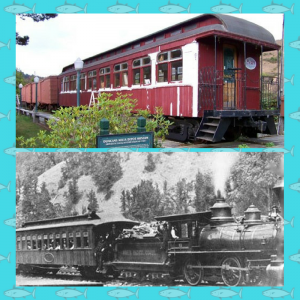 The North Pacific Coast R.R. ran from Sausalito to Cazadero via west Marin. Operated under different owners from 1877 to 1935 the line carried redwood to San Francisco and returned with weekenders who were anxious to party. From Freestone to Occidental, there was a dramatic horseshoe bend that allowed front and back passengers to gaze at each other before crossing the monstrous Browns Canyon Trestle, which at the time was the largest man-made structure west of the Mississippi. The broad gauge and narrow gauge met in Monte Rio before running down present day Moscow Road and crossing the Russian River at Duncans Mills. Nine years later the line was extended to Cazadero at the behest of the town’s founder, Silas Ingram. Much of the redwood lumber was used to help rebuild San Francisco and Santa Rosa after the 1906 earthquake.  It is also said that redwood pilings from the mills were used as foundation for the Bay Bridge.  END_OF_DOCUMENT_TOKEN_TO_BE_REPLACED 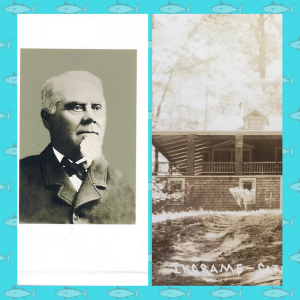 He later acquired federal timber land and moved his family to Sebastopol to be near his new enterprise along Austin Creek. He soon established a hunting resort in the rural area in 1869, naming it Ingrams.  Silas became the first post master of the town.   However, the mail was often not delivered on time or delivered at all.  That was because it was pilfered on a regular basis.  In an awkward twist of history, the culprit turned out to be none other than Silas’s own son, Charles,  who later confessed to the crime and served eighteen months in jail.  Tsk, tsk. END_OF_DOCUMENT_TOKEN_TO_BE_REPLACED

Trains Along the Russian River 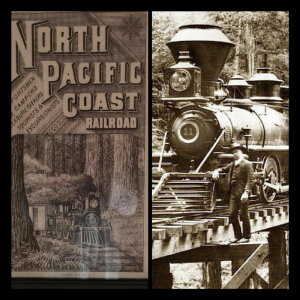 When the first excursion trains rumbled to the Russian River area on Sunday, March 25, 1877 the passenger cars were an assortment of open-end platform wooden coaches.  Fifty years later the same type of cars were still bringing thousands of excursionists to the local resort towns. It must have been something to see the black smoke billowing from the balloon stack, listening to the whistle as ol’ NO. 11 rolled into the station.  Perhaps the best part of the summer months was having the entire lower river available as your personal playground. When passenger and freight trains weren’t scheduled, the railway used the tracks to offer a kind of trolley service using an ancient steam engine and open railway car recycled from the old timber days. END_OF_DOCUMENT_TOKEN_TO_BE_REPLACED

Freight trains in 1915 would normally leave Occidental in rural Sonoma County around 7:30 a.m. for the ferry terminal at Sausalito and return late afternoon.  While timber had been the main cargo for the previous three decades, greed reduced the redwoods to 5% of their original growth.  The final knockout was the Russian River fire of September 17, 1923, which burnt everything from Guerneville to the Pacific Ocean.  With this calamity, there was a shift in merchandise.  END_OF_DOCUMENT_TOKEN_TO_BE_REPLACED

There were plenty of railroad misadventures along the banks of the Russian River of old.  The first wreck of the Fulton and Guerneville Line (an offshoot of the SF & NP R.R.) was in 1898.  While a locomotive was switching over to the turntable in Guerneville, it gave a nudge to a string of flats.  The brakes bled and the cars started off on the slight downgrade to Guernewood Park.  At the same moment, the Bully Boy was coming from Mission Gulch (present day Old Cazadero Rd.) with six loads of logs.  On the curve (where Old Caz Rd & Hwy. 116 meet), a head-on crash sent Bully Boy airborne. END_OF_DOCUMENT_TOKEN_TO_BE_REPLACED

“All Aboard for the Russian River” was a familiar call back in the day.  It must have been a thrilling sight when the Northwestern Pacific R.R. pulled into Guerneville along the Russian River.  The route began in 1876 and reached its peek in 1926 with 14,000 passengers on a summer weekend (30,000 on 4th of July).  After paying your round-trip fare of $1.25, you would board a ferry at the foot of Market Street in San Francisco for Sausalito.  From there you might do the “Triangle Trip”.  END_OF_DOCUMENT_TOKEN_TO_BE_REPLACED