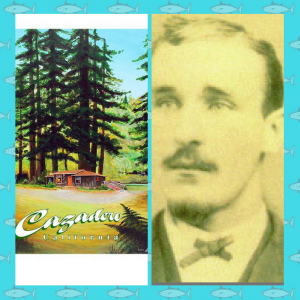 Just a few years ago in 2007, the entire town of Cazadero was for sale on the cheap. A similar occurrence happened in 1888. Despite being the rainiest place in the state (85 inches/year), the area has always had a certain appeal. This was true from the early beginning when George Simpson Montgomery purchased Ingrams and changed its name to Cazadero, which is Spanish for “The Hunting Place”.

At the time George was living at the Palace Hotel in San Francisco and holding membership in the exclusive Bohemian Club. Probably due to peer pressure, he soon developed into a two-fisted drinker with a reputation for visiting the brothels of a City that knows how.   His wife ventured in the opposite direction, establishing a ministry.  Her book, Prayer of Faith, was translated into eight languages and sold over four hundred thousand copies worldwide.  A few years later her husband saw the evils of his ways (what are the chances?) and converted to Christianity.

At the insistence of his wife, George Montgomery attempted to convince the local ruffians of Cazadero to go dry. In addition he forbade any gambling. If one did not obey these regulations, Montgomery blocked the person’s business activities with heavy tax penalties. I ask you, what kind of decent, civilized municipality would turn its back on a little sin? After all, the bible (or maybe it was my grandfather) says that God works harder for sinners. Well, He sure had his work cut out for Him in Cazadero with all the bootleg stills in the nearby hills and plenty of lumber mill roustabouts wanting to wet their whistles and spend their week’s wages on a game of chance.  As is often the case, wickedness won out over virtue and the locals had their way.  Would we have wanted history to turn out any different?  I think not.  A minor transgression here and there keeps us from falling asleep while traveling down the straight and narrow byways of life.  Next time: railroad mishaps in and around Cazadero.