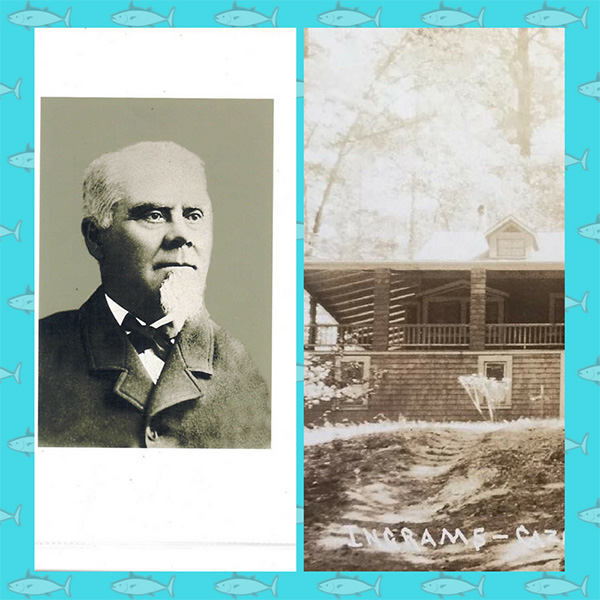 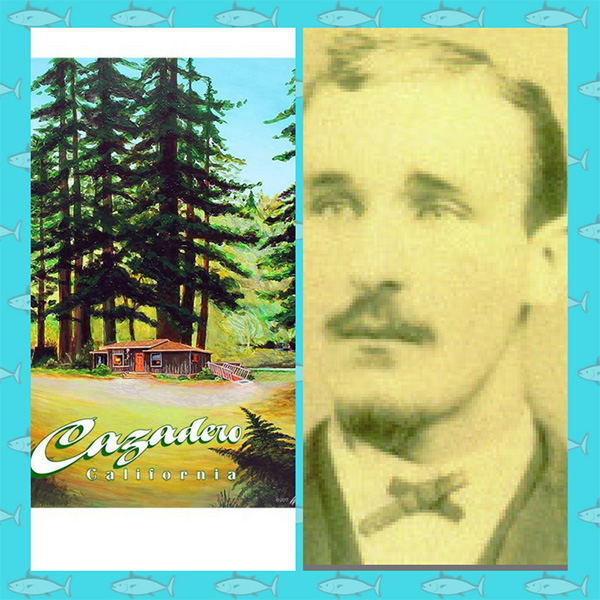 Silas Ingram (upper left photo) and his wife joined a wagon train bound for California in 1840. While crossing the plains, they were attacked by a warrior party of the Ute tribe.  The Ingrams walked over 100 miles to Salt Lake City where they caught transportation to San Francisco.  Soon thereafter, the family bought property in the hills north of the Russian River and built a hunting lodge (upper left photo) and a sawmill.  Today, that property is known as Lions Head Ranch.
In 1869 Silas became the first post master of the nearby town, which was named Ingrams in honor of the family.   However, the mail was often not delivered on time or delivered at all.  That was because it was pilfered on a regular basis.  In an awkward twist of history, the culprit turned out to be Silas’s own son, Charles,  who later confessed to the crime and served eighteen months in jail. Silas Ingram died on June 8, 1900 and is buried at the Redwood Cemetery in Guerneville.
In 2007 the entire town of Cazadero was for sale on the cheap. A similar occurrence happened in 1888. Despite being the rainiest place in the state (85 inches/year), the area has always had a certain appeal. This was true when George Simpson Montgomery (upper right photo) purchased Ingrams and changed its name to Cazadero, which is Spanish for “The Hunting Place”.
At the time George was living at the Palace Hotel in San Francisco and holding membership in the exclusive Bohemian Club. Probably due to peer pressure, he soon developed into a two-fisted drinker with a reputation for visiting the brothels of the City.   His wife ventured in the opposite direction, establishing a ministry.  Her book, Prayer of Faith, was translated into eight languages and sold over four hundred thousand copies.  A few years later her husband saw the evils of his ways and converted to Christianity.
At the insistence of his wife, George attempted to convince the local ruffians of Cazadero to go dry. If one did not obey the new regulations, Montgomery blocked the person’s business activities with heavy tax penalties. I ask you, what kind of decent, civilized municipality would turn its back on a little fun? After all, the bible says that God works harder for sinners, right? 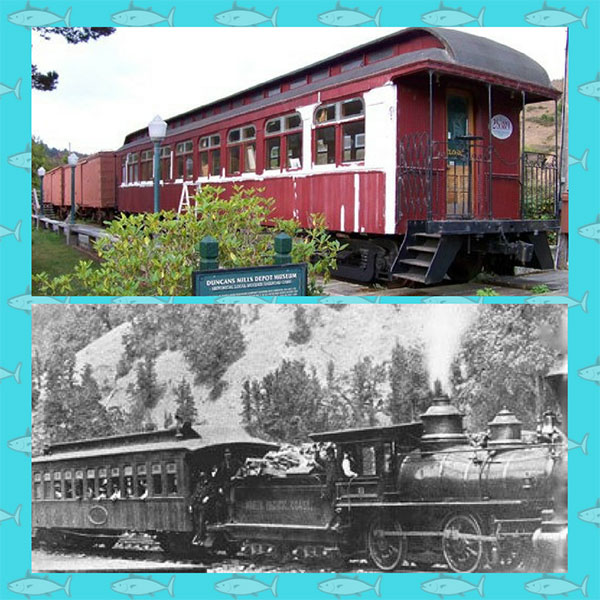 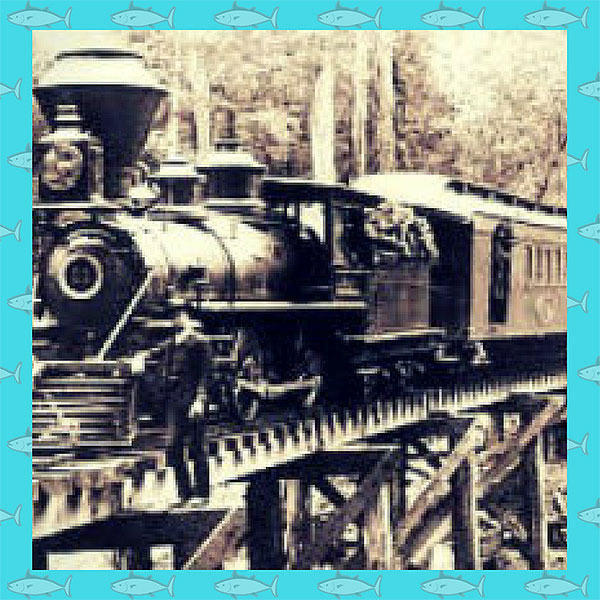 The North Pacific Coast R.R. (upper left photos) ran from Sausalito to Cazadero via west Marin. Between Freestone and Occidental the train crossed the monstrous Browns Canyon Trestle, which at the time was the largest man-made structure west of the Mississippi.
The broad gauge and narrow gauge met in Monte Rio before running down present-day Moscow Road and crossing the Russian River at Duncans Mills, continuing to Cazadero, etc. The local lumber industry helped rebuild San Francisco and Santa Rosa after the 1906 earthquake.  It is also said that redwood pilings from the mills were used as foundations for the Bay Bridge.
Mishaps along the line were plentiful.  George Montgomery’s insistence that the town go dry might have initiated a protest in 1894 when Engine No. 9 was hijacked by its crew and others in Duncans Mills with the intent of a party-run to Cazadero. The train never reached its destination, plunging into Austin Creek while attempting to cross the trestle at Elim Grove (upper right photo) .
Ten days later a local Native American shaman joined the search for missing persons.  He affixed a candle to a board and sent it on its way downstream.   In an eddy of tangled brush, the remains of seven men were discovered.  Booze and religion have never been good bed partners.
On September 17, 1923, a moonshine still blew up, igniting a blaze that roared through the lumber mills from Guerneville to Jenner.  With the lumber trade on the fritz, passenger service had to pick up the slack.  The Northwestern Pacific Railroad offered “dollar days” on weekends with a roundtrip fare of $1.25 between the City and the River.
The Depression soon arrived with the NWP running over a million dollars in the red. The last train out of Cazadero was on July 31, 1933, followed by the Guerneville line two years later. Locals mobbed the passenger cars for the final ride and partied to the next stop. Some inebriated souls, however, lost track of time (and consciousness)  to find themselves at the terminus in Sausalito.  Or so the story goes. 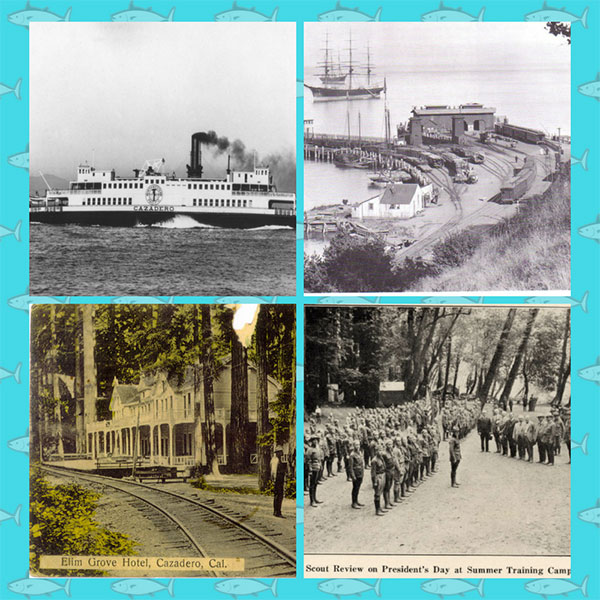 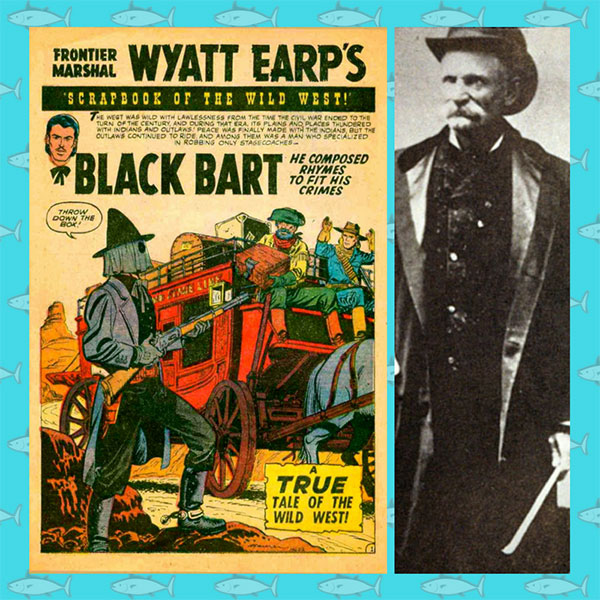 Black Bart (Charles Boles) robbed the Wells Fargo & Co. stagecoaches on twenty-nine different occasions.  Two of these holdups were near the Russian River.  One was just west of the town of Duncans Mills.  The second was north of Jenner at Meyers Grade on August 3, 1877, where Black Bart made his demands in a civil, gentlemanly manner accompanied by a double-barreled shotgun.  He tucked away the $300 in cash and tossed the following poem into the strongbox: “I’ve labored long and hard for bread / For honor and for riches / But on my corns too long you’ve tread / You fine-haired sons of bitches.”
It is said that he hid out that night at a barn (the refurbished version can be seen on present-day Hwy. 116 at Sheridan Ranch) before heading into Guerneville.  At a future holdup, he left behind a handkerchief with a laundry mark, which led to his ultimate downfall.  Charles Boles served over four years in San Quentin Prison before being released in 1888.
Upon his release, Black Bart was asked if he would rob stages again. He said no.  The reporter continued and queried whether or not the infamous poet had any more verses up his sleeve.  His response was: “Young man, didn’t you hear me say that I wasn’t going to commit any more crimes?”
SIDEBARS:
Alice Adams Dahl’s research states that Black Bart never rode a horse.  He always walked.
Perri Paniagua recalls that for over sixty years her relatives had told her that the name “Elim” is “mile” spelled backward, the distance from town.   Others say that George Montgomery’s wife gleaned the name from the Bible.  Exodus 15:27: “And Moses came to Elim where there were twelve wells of water…”  Scholars interpret Elim as being “The Place of Refreshing”.
Cheatham Jethro remembers as a local getting booted from the Boy Scout swimming hole on many occasions.