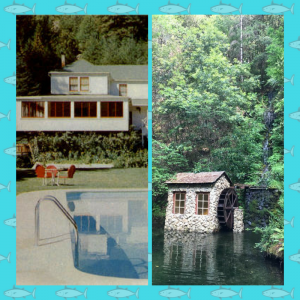 CazSonoma Inn was formerly known as Cazanoma Lodge. At one time it was a hunting resort and now serves as a quaint bed and breakfast. Getting there is half the adventure as you wind your way up Cazadero Highway toward the three-store town by the same name. Head up Kidd Road along a dirt path for three miles until you arrive at an English cottage with formal gardens and a lazy pool. Millpond Cottage, the inn’s main building, featured a menu specializing in beer-braised bratwurst with cabbage and roulade, all cooked by a big German chef named Oudo.   This was back in the day when Randy and Gretchen Neumann (widow of John Mino) were owners and managers (1970-2000).

The CazSonoma Inn’s bar overlooks a waterfall and a millpond where at one time you could catch trout for your dinner. The mill was built in 1941 but sadly has not turned since 2012. Today the inn offers California cuisine and is run by Rich Mitchell and his wife Renee. Rich, a poet and author, is often seen joining patrons at their table, engaging them in many a literary discussion. This explains why the six guest rooms are named after his favorite scribes. Typically, quarters with two queen-sized beds and large bathroom, will fetch $150 for the night.  Not a bad deal if you’re seeking serenity and seclusion.  Or just taking a respite from the apocalyptic news of the day.