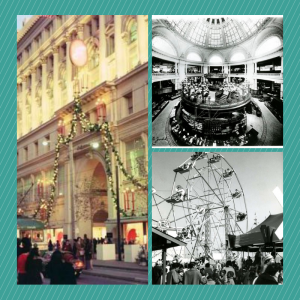 Do you remember the Christmas parade rolling along Market Street in downtown San Francisco? As a tot, you were mesmerized as Santa slithered out of his sleigh and wobbled into the Emporium. In a dash, you sped from the cable car turnaround across the street at Powell and rushed passed sidewalk street artists and a good-news prophet who held up sandwich board that read: “Fallen, Fallen is Babylon the Great”. Once inside the seven-story neoclassic structure, the centuries old department store (built in 1896) came alive with a self-promoting tune. An orchestra, situated on a spherical platform above a dining area, bellowed out the “Emporium March” to get your parents and grandma in the capitalistic mood. But grandma wouldn’t have it, complaining “what kind of Santa would be found south of Market?”

The Emporium at Christmas:

The bearded man in question lurked ahead, greeting everyone under the glass dome on his way up the escalator (first of its kind in S.F.-1936). Once on the rooftop, it was easy to lose focus as giant candy canes, life-size toy soldiers, two merry-go-rounds, Ferris wheel, train and other distractions competed for your attention. Soon, however, you were back on track, pursuing your mission under the guidance of twenty elves when, without warning, a harangue rang through the crowd. Disheveled Santas, clad in cheap red suits started shouting unchild-like greetings. The gang of fifty faux Clauses flashed body parts at bystanders, drinking beer, smoking marijuana. But before hell could reign supreme, all was restored with the jingle of handcuffs and a stray complaint with a ho-this and a ho-that.

The next day, you caught your father spill out a giggle under the disapproving glare of your mother as he read an article in the Chronicle titled: “Rowdy Santas Invade S.F. Stores.” And so another Christmas came and went in the year 1995, one year before the Emporium would close for good.  Happy Holidays!