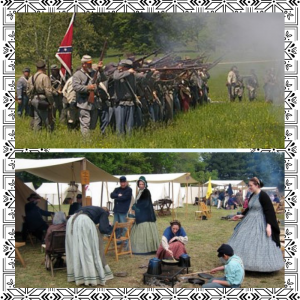 “There’s a lot of brush clearing to be done,” says Teri Moretti of Petaluma, “not to mention the issue of the cow patties.” These bovine pies, however, remain where they lay, making navigating the battlefield somewhat like negotiating a minefield. The surrounding hills of Freezeout Road soon become filled with the sound of fife and drum, musket and cannon as soldiers engage in a war that took more than 700,000 lives from 1861-1865.

Most units keep a “loaner box” of authentic uniforms for the last-minute visitor who wants to partake and feel the itch of wool under a smoke-riddled sky. Patrons can visit the makeshift camps and interact with doctors, nurses, musicians, merchants and townspeople of yesteryear. While the display of the Confederate flag around the country today often incites strong reactions, the participants of the Civil War Reenactment feel that their presentation is a reflection of history and not racial sentiments. However, it is said that on one occasion security had to escort members of the audience for publicly demonstrating such views.  Don’t forget to don the period garb and attend the hoedown at Casini Ranch.