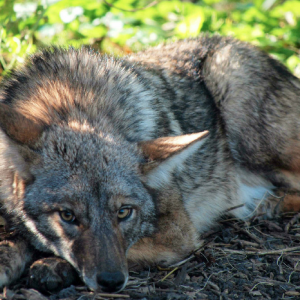 A coyote of Telegraph Hill has taken up residence with the wild parrots in North Beach of San Francisco. There has been an increase in urbanized coyotes around the City in general, causing Animal Care & Control to put up warning signs on popular walking paths. The critters have shown they can survive in a surprisingly small territory such as the five-acre Pioneer Park, which surrounds Coit Tower at the top of Telegraph Hill. The sudden increase in coyotes likely started when they ventured across the Golden Gate Bridge from Marin County and began thriving in the Presidio before migrating south toward Golden Gate Park.

The Coyote of Telegraph Hill:

The coyote of Telegraph Hill possibly arrived there around 2005. It has become comfortable with humans, strutting around during daylight hours in an area ripe with foot traffic.  Fruit trees, rodents and pet food have encouraged the animal to stick around. Besides the disappearance of a cat a few years ago, there haven’t been any reports of the Telegraph coyote acting aggressively. Hopefully, he doesn’t strap himself to a rocket and become airborne like his distant relative Wile E. Coyote.

For more photos and history of the district, scroll down and click on “Telegraph Hill”.  For samples of our free monthly online magazine of old San Francisco and the Russian River, click on any of the dates below “Newsletter Archives”, also at the bottom of any page on the website.  For a fun read of Telegraph Hill as well as the Russian River, check out Stumptown Daze, by going to “Novels”.  Have fun exploring.