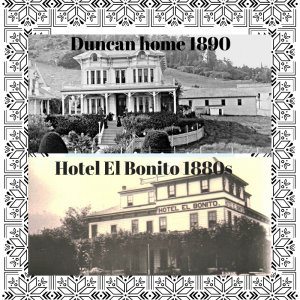 Duncans Mills gets its moniker from the Duncan brothers, Samuel and Alexander. Some say they were the first sawmill operators on the Sonoma Coast. They originally founded a mill just east of Freestone before relocating near the mouth of the Russian River near today’s Bridgehaven. Many a log, which floated downstream to the site, would wash out to sea in bad weather. Another disadvantage to this location was the lumber would have to be hauled by horse-drawn tram to Duncan Point (just south of Wright’s Beach) where waves, currents and weather often did not cooperate with the loading of timber onto waiting ships headed for the San Francisco market. Two events in 1877 changed the town’s destiny forever. A fire burned much of the mill, and the North Pacific Coast Railroad was approaching inland.

The brothers decided to move the surviving buildings by barge upstream three miles to the present-day locale. By 1880 Duncans Mills was the largest town along the lower reaches of the Russian River, boasting a post office, telegraph office, train depot, two hotels, saloon, meat market, blacksmith shop, shoe shop, livery stable, dance hall, school and a notion store for your sewing supplies, fabrics, buttons, snaps, etc. The population of the town numbered about 250 souls at this time. According to the 2000 census, the town now claims seventy-five fewer residents. Some would consider that progress.