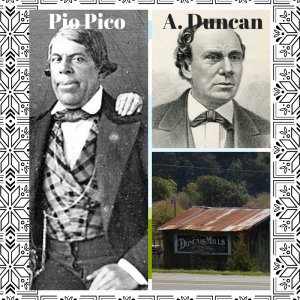 Duncans Mills, the early days, tells a tale of greed, international tension and fate. Once upon a time it was part of Alta California, which was under the Mexican governorship of Pio Pico. He was often ridiculed for his physical deformities resulting from acromegaly, a disease caused by the unregulated release of hormones causing abnormal growth of hands, feet and face. One newspaper critic called him the “ugliest man in the territory”.  It is easy to understand why Pico developed a tough skin. He scorned his enemies and protected his allies. When the Russians abandoned Fort Ross in 1841 and sold the surrounding land to John Sutter, Governor Pico exposed his combative side and went into action. He issued the sale “null & void” and instead gave the land to a close friend, Manuel Torres, as part of the Rancho Muniz Land Grant.

Rancho Muniz extended from Slat Point to the Russian River including the present-day area of Duncans Mills. Sutter had his own militia and the fear of violence was very real. With the cession of Alta California to the U.S. following the Mexican-American War, the 1848 Treaty of Guadalupe Hidalgo provided that this land grant be honored. If Sutter had succeeded in his claim of ownership, would he have sold part of his land to Alexander Duncan as Manuel Torres eventually did? My guess is that Sutter would not have in order to prosper from the future potential of lumber. Our small hamlet along the Russian River could have easily been labeled Sutter’s Mill instead of Duncans Mills. And to what extent would this have changed the area? Who knows, but the name “Sutter” back in the day carried a lot of weight.