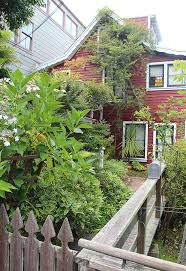 In Stumptown Daze, we find wily dementia patient Walt living with his Rotuman caregiver Lani on the east side of Telegraph Hill along the Filbert Steps in San Francisco. These two characters own a tempestuous relationship amid the peace and calm of this hidden gem. One of Walt’s favorite activities is to perch himself on the back deck and watch the scenery, which includes the Embarcadero, Bay Bridge and a lovely lady who often tans herself on the roof of a residence further down the lane.

The Filbert Steps is my favorite hideaway in the city, well-known for its lush gardens and plank alleys. Those sidewalks are actually an extension of Filbert Street and thus the lone wooden boulevard in northern California. The stairs (all 248 of them) are the only access to homes along the way, except at the crossing of Montgomery Street. Napier Lane showcases a half-dozen residences, which date back to the 1860’s and 1870’s (see image). Many were reputedly used as holding pens for drugged sailors during the gold rush era until they could be loaded onto vessels below the hill at the wharf (now filled-in land along Battery Street) and shanghaied back out to sea.

Some of the more famous movies that were filmed near and around Filbert Steps are: Dark Passage with Humphrey Bogart (1947); Pal Joey with Frank Sinatra (1957); Alfred Hitchcock’s Vertigo with Jimmy Stewart (1958); and the 2003 documentary-The Wild Parrots of Telegraph Hill.