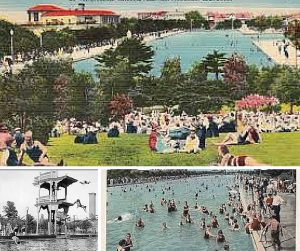 The Parks Commission supposedly kept the temperature of the pool at 72 degrees as required for A.A.U. meets, but it felt much cooler with the damp sea breeze coming off nearby Ocean Beach.  In 1925, five thousand spectators watched Johnny Weissmuller, the reigning freestyle champion in the world and later of Tarzan film fame, win his event.

During World War II, the army used Fleishhacker Pool for amphibious assault training.  With the return of peacetime, attendance continued to be high.  For twenty-five cents (children under twelve during the 1950’s), I received admission, a sterilized bathing suit and a towel.  There were some twelve lifeguards on duty as well as a number of patrolling rowboats.   Mom would purchase corn dogs and fries at the Fleishhacker Pool’s cafeteria and walk my sisters and I to the man-made, tree-sheltered beach for a picnic.  But once again, politicians had other intentions for the desirable land.  They surrounded the pool with an ugly cyclone fence as part of a scheme to dissuade the public from using the facility while pursuing ambitions for the construction of residential properties.   Some City servants to this day believe that the collapse of the outflow pipe from the pool was the conspiracy of downtown and a small group of contractors.  In either case, nothing came of the building projects, but Fleishhacker’s closed forever in 1971.  Keep the memories alive.  Until next time.