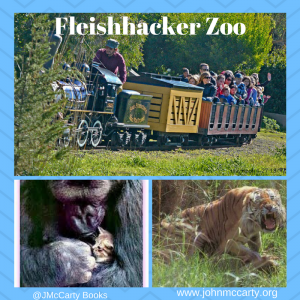 The zoo is the birthplace of Koko the gorilla who can be seen in the photo cradling a kitten.  Visitors remember what a ham Koko was, often times seen holding binoculars and gawking back at them or drinking a cup of coffee or lifting the T-shirt of a trainer and tickling him.

At the Fleishhacker Zoo in 2006, Tatiana, a 242-pound Siberian tiger, attacked a trainer, sending the person to the hospital and causing the Lion House to be closed for ten months.  A year later this same tiger escaped from her grotto and attacked three visitors who were taunting the animal.  One of the taunters was killed and another was tracked and mauled but survived.  Unfortunately, Tatiana was killed at the scene by police.

On a lighter note, 2006 was the same year that Fleishhacker Zoo named a bald eagle after comedian Stephen Colbert.  Do you remember Uulu?  At 36, she was the oldest polar bear in captivity in the U.S. at the time.

From more on the activities along the Great Highway in old San Francisco, go to www.johnmccarty.org and click on “Ocean Beach” at the bottom of any page.  Enjoy!