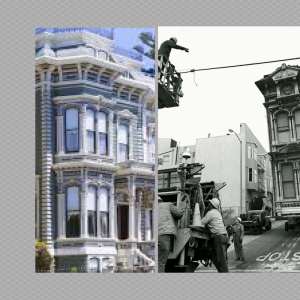 The Redevelopment Agency ran Geary Boulevard under Fillmore Street so that commuters from the Richmond District could bypass any “trouble’ on their way to their glass cages in the financial district. The wrecking ball found its target on the backsides of some two thousand painted ladies as well. The Victorians were left to rot where they fell.  Kids played in the rubble, competing with each other to see who could catch the biggest rodent.

Absentee landlords took advantage of the chaos. In one building, four different families (sixteen persons total) alternated shifts living in a one bedroom apartment, the other three families making do on the streets for a night or two. And there was no toilet. Don’t let the cop catching you pissing in the street. Better do your business at the gas station down the block or else.  While the Board of Supervisors has unanimously voted to rename Justin Herman Plaza for a more honorable figure, the gentrification of the Fillmore continues as high-priced restaurants, taverns and hotels force locals out.

For more, scroll to the bottom and click on your favorite neighborhood or town.  Also, the underside of the Fillmore is depicted in Don’t Stop the Music, a historical fiction novel that takes place in 1967.  If interested, go to the top and click on “Novels” for more details.