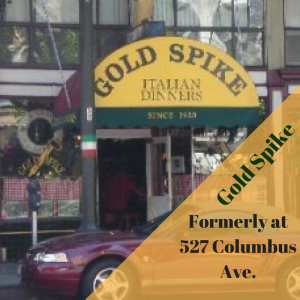 The Gold Spike featured an uneven floor in the front dining area near the bar as well as business cards and dollar bills plastered all over the walls and ceiling.  Even the stuffed moose and marlin were tagged.

Remember the rusty horseshoes and the glossy football posters? Besides the comfy decor, the Gold Spike served huge portions with the butteriest, garlicky bread this side of Rome.  Doggie-bags were routine.  The menu stayed the same over the years. The five-course meal at Gold Spike included soup, salad, pasta, entree and dessert, which went for $24.95–a rather steep price back at the turn of the century.  While the food wasn’t the best, you truly felt as if you were part of a family when you arrived.  Many celebrations took place there: first dates, birthdays, anniversaries, memorials, graduations, etc.

Paul Machetti, the last of four generations of family owners, had to shut the restaurant’s doors in February of 2006 after 86 years in the same location.  Evidently, he couldn’t afford the sewage and earthquake upgrades that his landlord demanded.