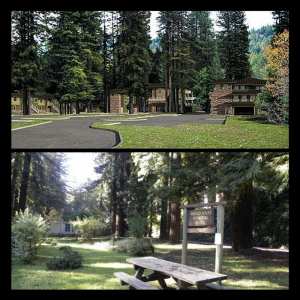 The existing empty lot next to the Dubrava Village is owned by Kirk Loc who hopes to build a new resort there.  The plans call for 100 hotel rooms, 20 housekeeping bungalows, conference rooms, restaurant and a spa (top photo).

Supporters hope that the new resort will revitalize the region’s economy.  The four-story hotel would evoke a traditional rustic lodge appearance and sit just above the beach.   The long dormant plan for the resort has been kicked around for the last twenty years, since a previous developer, Paul Wang, built 55 condos before the financing for the project floundered amid the 1980’s savings-and-loan fiasco.  The Lok Group operates the Holiday Inn in Sebastopol and the Day’s Inn in Petaluma.  An added bonus if the project moves forward would be the reduction of litter, drugs and homeless encampments on the property.

For more on the Russian River or San Francisco, scroll to the bottom of this page and click on your favorite town or neighborhood.  Also, don’t forget to explore the award winning novel, Don’t Stop the Music, by clicking on “Novels” at the top.