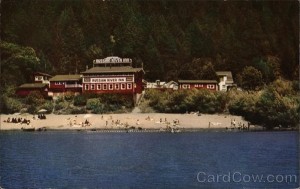 In 1865, George Guerne, a young Swiss immigrant, bought a sawmill, and in 1870 Stumptown was renamed Guerneville in his honor. He also purchased adjoining parcels, which became known as Guernewood Park. The unincorporated subdivision, which rested west of the main town, possessed a tavern as well as a dance hall where some of the Big Bands performed in the 1930’s &1940’s. But the most popular orchestras were homegrown such as the Harry Davis Orchestra and the Castles Family Band.

At one time there existed an indoor bowling alley, an outdoor movie theater, and stables, which provided both hayrides and horseback adventures. Guernewood beach was one of the more popular spots along the lower reaches of the Russian River during the 1950’s & 1960’s, featuring concession stands, boat rentals, a high dive board and a forty-foot slide. Butting up against Hulbert Creek were a food market and liquor store, a bakery, the Sportsman Club bar, and a restaurant. This section was torn down in the late 1960’s, giving way to an empty lot. The tavern was later abandoned, vandalized and burned down around 1974.

During the 1940’s, Guernewood Village was another popular destination, which stood across the road from present day Dubrava and Highway 116 (formerly known as Highway 12 until 1961). Past an arched entrance, a walkway would lead to a café, game booths (including Skee-Ball and a baseball throw with milk bottles, etc.), a four-lane bowling alley, a pool hall, a clubhouse, an outdoor movie theater, and Noble’s Grocery Store. A dance pavilion was later converted into a roller skating rink. Catholic Sunday services were held in an open-air church, which was located on Lover’s Lane. The apse, where the altar and pulpit once stood, is still visible today.