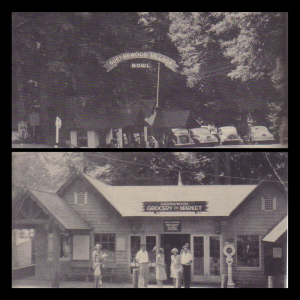 The bottom photo shows the Guernewood Grocery, known from the 1940’s to the mid-1950’s as Noble’s Grocery Store.  It was located just under the Guernewood Village sign and just west of the present-day Garden Grill.

Guernewood Village also featured an outdoor roller skating rink where the tennis courts are today.  To complete the recreational scene there was an outdoor movie theater.  A housing boom along Old Cazadero Road in the twenties thru the fifties propelled the area into the limelight.  Most of the homes were built on stilts to withstand floods.  A typical three-bedroom abode in 1952 would set you back approximately $4,000, the same price for that year’s Buick station wagon.