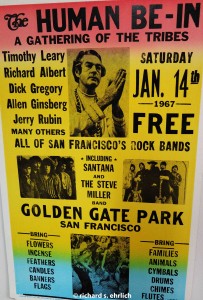 The Human Be-In got its name from combining humanist values with the scores of sit-ins at college campuses and southern lunch counters.  The event was announced as a gathering of tribes to protest a new California law banning the use of the psychedelic drug LSD that had been put into effect the previous year.Timothy Leary set the tone for that afternoon with his famous phrase “Turn on, tune in, drop out”.  Poets like Allen Ginsberg and Michael McClure also took the podium.  Dick Gregory, Lawrence Ferlinghetti and Jerry Rubin were also in attendance, lending their satirical wit to the festival.  The Hells Angels, at the peak of their outlaw reputation, provided free security and corralled lost children.` Jefferson Airplane, Janis Joplin, Big Brother and the Holding Company, and The Grateful Dead all lived within blocks of each other and played at the event.  Underground chemists provided large quantities of “White Lightning” LSD to the gathering masses.  The 30,000 people that showed up that day would not have imagined what it was introducing to the nation.  The following summer that number would quadruple as teenagers and returning vets and  curiosity seekers descended upon the neighborhood.  A battle soon ensued between idealists and downtown officials who threatened to level entire districts in order to save the City from the unholy music.