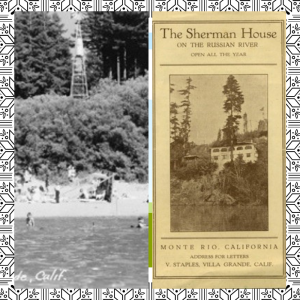 Between Monte Rio and Duncans Mills along the Russian River is Villa Grande, formerly known as Big Flat, Mesa Grande, and Grandville. Vacationers from San Francisco would climb aboard the North Pacific Coast Railroad for the three-hour ride from Sausalito to their front door. The community soon accommodated the Villa Grande Hotel, a firehouse, general store, post office, and numerous shingled cottages. 1910 was the first year that electricity arrived in Villa Grande along with a windmill (photo on left), which supplied water to the cabins. It was dismantled in 1977 and given to a camp in Cazadero but the attached house still exists. With the revenue collected from their whist games, the good ladies of the village erected a sturdy windbreaker for the main beach each summer, which was located directly in front of the windmill.

If you wanted to get away for a few days to swim and paddle around in shallow water or even just lounge away like a sloth in a tent-cabin, the Russian River was THE destination. Directly across the river from Villa Grande was the Sherman House (known today as “The Chocolate House”…photo on right), serving as a hotel for those visiting Monte Cristo. This tourist locale extended from the Sherman House to present-day Monte Cristo Avenue near the Monte Rio Elementary School. This was the most popular party venue for residents of Villa Grande as it rightly laid claim to hosting the largest dance floor along the lower reaches of the Russian River.