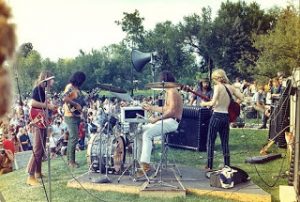 Jerry Garcia and the Grateful Dead played at Rio Nido along the Russian River on September 3, 1967.  At the time that was not a long commute for the boys as they owned an eighteen acre commune in Forestville’s Pocket Canyon off of Giovanetti Road.  The only glitch was that one of their trailers hit the old road sign upon entering the hamlet and knocked it down, but it has been resurrected for all to admire once again.

The concert on September 3, 1967 lasted one and half hours as the group started off with “Dancin’ In the Streets”.  Jerry’s guitar sang soft as he weaved Indian, blues, rock and acid into a spiraling of riffs.  When the dose started to get too heavy, he settled back into a comfy funk groove and wrapped it up as you stood there in awe.  “The Viola Lee” began in typical grungy fashion.  Bobby Weir flung little melodies all over the place while Jerry locked into some bluegrass, later switching over to sitar-like flavors. It was a psychedelic monster with scorching Jerry licks and quick staccato punches by Phil Lesh.  “The Midnight Hour” rounded out the set in an epic 31 minute version with a rap by Pigpen McKernan.  People were on their feet, rockin’ out, riding the rainbow, until things switched up into screeching, molten pools of glorious chaos.  A Dead Head moment in our backyard.

Until next time, keep turning those pages, my brother.