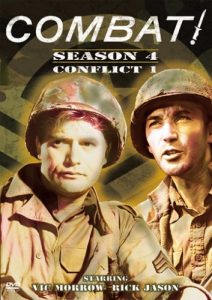 Korbel Champagne Cellars was bought in 1954 by Adolf Heck.  The previous four years he had been president of Italian Swiss Colony Winery. Under Heck’s leadership, Swiss Colony developed one of the most successful marketing campaigns in the history of spirits, using “the little old winemaker, me” tagline for its advertisements. After four years at the helm, Heck had transformed Swiss Colony into the largest American winery before moving over to Korbel.  There he continued his winning ways, thinking of creative promotional stunts for the bubbly. One such venture served dual purposes when he hooked up with the producers of the 1962 T.V. series, Combat!, starring Vic Marrow.

Adolf Heck was in need of additional space for vineyards.  Much of the Korbel land was left over from when the area was a thriving lumber company back in the 1880’s.  Redwood stumps poked up thru the ground like a pimpled-face teenager.  To resolve this problem, he sought out and suggested to the people from ABC to shoot their WWII fighting scenes on the property.  On one condition–Combat! had to use live ammunition.  Thus, Heck not only acquired free publicity but cleared his land of those nasty stumps.  The gimmick worked and the winery continued to break records, topping out in 1999 with 1.6 million cases sold.  But that was the year of the Y2K fear of computer meltdowns and terrorist attacks.  One after another, hotels and restaurants cancelled New Year’s celebrations.  It took two years for Korbel to recover.   Since then, he has passed the torch onto his son, Gary, and Korbel continues to do the Russian River Valley proud.