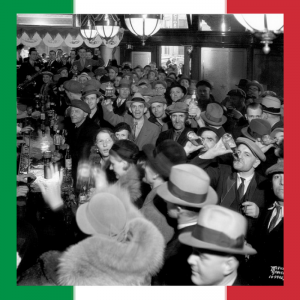 North Beach during Prohibition remained a wide open city. San Francisco officials rejected the idea of enforcing the law against alcohol, allowing its citizen to continue their gin-guzzling ways. The mafia from the East Coast moved in to control the speakeasies and flow of illegal booze. In 1928 a four-year power struggle for control of North Beach resulted in a blood bath that included the deaths of five different Sicilian bosses all of whom had brief reigns in the district. In 1932 at the Del Monte Barber Shop at 720 Columbus Avenue (North Beach Citizens’ headquarters today), Luigi Malvese was gunned down in a hail of bullets with the killer applying the coup de grace behind the ear. The manager of the shop dragged Malvese out to the gutter before returning inside and resuming business.

The City That Knew How:

The City that knew how was first in both alcohol and gin mills per capita during this period. What later became Mooney’s Irish Pub had a speakeasy in its basement next to a bocce ball court. If there was an unexpected raid, the owner simply changed the color of the curtains on the storefront windows as well as a couple of digits in the street address. In 1933 the Volstead Act was repealed. The bootleg trade dried up and most of the mafia boys left town at the behest of the SFPD.

For more historical tidbits, scroll to the bottom and click on your favorite neighborhood or town.  For an inside peek into the award-winning historical fiction novel, Don’t Stop the Music, go to the menu bar at the top and click on “Novels”.