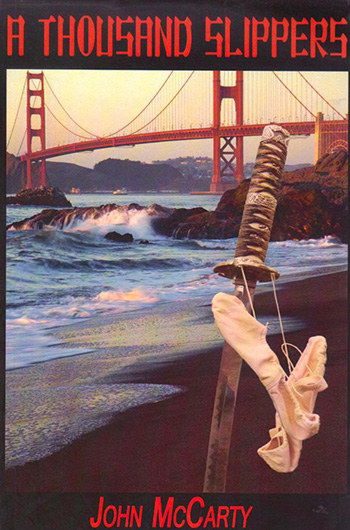 Anne Klausen busies herself with a promising ballet career in San Francisco.  All seems on schedule until the bombing of Pearl Harbor by the Japanese Imperial Navy on December 7th, 1941.   Anne’s widower father, Elmer Klausen, and his vigilante pals go on a rampage through Japantown in search of the Black Dragons who are responsible for the killing of two of their comrades.  Or so everyone believes.  Fear of an impending invasion along the western seaboard is heightened when Nobuo Akita, an aviator aboard an enemy submarine aircraft carrier, becomes the instrument for the first aerial bombardment of North America.  However, he soon learns of the accidental death of a five-year-old during his raid near Brookings, Oregon.  This mishap haunts him.  In a future mission, he cannot bring himself to destroy the U.S.S. Lexington, which is moored in San Francisco Bay, and he flees into the back alleys of the city.  Fate introduces him to Anne who is forced into an uneasy alliance with the foreigner in order to save her father from his own kind.

“A Thousand Slippers is an ingenious and intriguing  book with a counterpoint between a Japanese airman on a submarine in the early days of World War II and a colorful cast of characters in San Francisco…a delightful read.”
-San Francisco Museum and Historical Society

“Armed with a sharp wit, the author weaves iconic characters through a historic maze with such ease and color that we simply shake our heads in a whaddya-know kind of wonderment.
-Russian River Times

“Mr. McCarty is emerging as one of our truly distinguished local treasures…”
– Windsor Times

“You care. You are angry. You feel fear. You hate. You feel the heart-rendering frustration of injustice. This is history….You live in the heart of San Francisco and are part of how the city reacts to the Japanese attack (on Pearl Harbor). Character upon character gets introduced as the fabric of this story becomes more complex and emotionally as well as intellectually deep.”
-Sonoma County Gazette