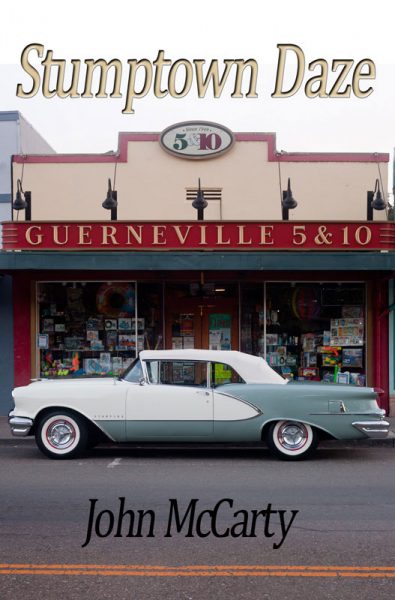 Stumptown Daze, a 1960 romance comedy, finds a free-spirited Lani as a caregiver to sixty-five-year-old dementia patient Walter in San Francisco’s North Beach. From the remote island of Rotuma, Lani struggles to carve out a place for herself in the beatnik enclave. To escape the evil machinations of his daughter, Walter flees to Guerneville in rural northern California, tricking Lani to join him. While staying at Murphy’s Guest Ranch, the young Rotuman girl encounters a troubled, obsessive-compulsive chef by the name of Jake. A bitter and awkward connection soon develops as they try to survive Memorial Day weekend together. Circumstances, however, force the couple to put aside their mutual dislike for each other in order to find Walter who has gone AWOL in search of one last tryst. Ladies of the night, local rubes, a redneck sheriff and a drunken politician intervene to complicate matters.

“Set in the early 1960’s, John McCarty’s Stumptown Daze is a wild adventure of comedy and romance. From rednecks to prostitutes, sheriffs and politicians, the author vividly portrays the colorful history of the river from yesteryear.” – Sonoma County Gazette

“McCarty, with iconic landmarks in this historical fiction, keeps you hopping from The City to The River and asides. A nice intertwining with well-known names from the past. A fun read.”
– Russian River Historical Society

“The author shapes a variety of historic plot lines, including memories of the Willie Mays era, the music of Dick Crest, dance hall antics and the joy of doing the Hokey-Pokey.”
– Sonoma County Historical Society

“The author can make the most jumbled scene seem like the norm along the Russian River, which, in fact, it often has been and often is. The whole thing is kind of a hoot with local history lurking behind it. Read it for the good times.”  – Sonoma West Times & News

“The author gives us characters and plots that seem beyond the pale but are actually rooted in history. The story comes to a crescendo with the Stumptown Daze Parade of 1960, which features much that is wild, wonderful and a little off in the River scene. A delightful read.”
– The Upbeat Times