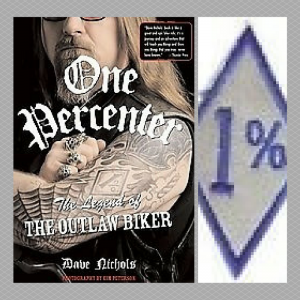 Members of outlaw motorcycle clubs such as the Hells Angels, Pagans, Warlocks and Bandidos wear the diamond-shaped patch over their leather jackets.  The inspiration for this was traced to 1947 when members of “The Pissed Off Bastards” and the “Boozefighters” motorcycle clubs showed up in Hollister, CA for a bike race which went sideways.  The Life magazine story that followed provoked the American Motorcyclist Association (AMA) to denounce the boozed-up bikers. It assured the average Joe that 99% of bikers were law-abiding citizens.

Outlaws as One Percenters:

Bad boys everywhere latched onto the decry from the article, saying they were proud to be the 1% cast as outlaws.  The most feared and respected riders roaming the blacktop, one percenters are a breed apart from all others.  These individuals bow to no one, test the boundaries of all and give their devotion to few.  Without wanting to glorify them, as a writer I find their persona still haunting after all these years.  Hopefully, in Don’t Stop the Music, Sonny Barger (founder of Hells Angels-Oakland Chapter) will not be exalted, but neither will he be thrown under the bus.