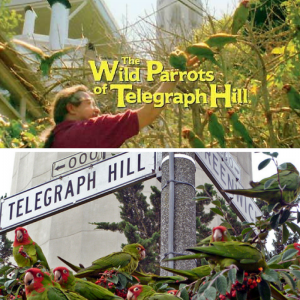 Filmed in 2005, the movie won 4 awards at different film festivals for best documentary. Through Mark Bittner’s own words, we learn of his life as a frustrated, homeless musician and how he came to live in the area where he decided to explore the nature around him. That lead him to discovering the parrot flock and the individual personalities of it. In a cinematic portrait, we are introduced to his colorful companions and the relationship they share as well as the realities of urban wild life that would change Bittner’s life forever.

The birds, known in the trade as cherry-headed conures, are native to Peru and Ecuador.  They have established a breeding colony with the support of some residents and through the help of volunteers with Mickaboo Companion Bird Rescue.  They range widely, including along The Embarcadero and in the Presidio.  A controversial San Francisco city ordinance passed on June 5, 2007, prohibits the feeding of parrots in public spaces. The feeding ban was championed by Mark Bittne, the birds’ most outspoken supporter who fed them for years.

For more on Telegraph Hill, go to https://www.johnmccarty.org