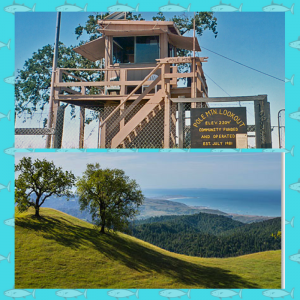 Pole Mountain was formerly known as Mt. Ross, taking its name from the nearby Russian fort. In 1898 the U. S. Signal Corps erected a tower on the highest peak along Sonoma County’s coast with an elevation of 2205 ft. When the federal surveyors were finished with their mapping, they left the transit-sighting pole in place, forever to be known as Pole Mountain.   It is hard to believe in this day of extreme fire danger and global warming (which President Donnie T. says mankind does not contribute to) that Pole Mountain is the only active lookout in the county. Without much assistance from government, the good people of Cazadero and the surrounding area have gathered donations and held fundraisers (e.g. annual breakfast at the Caz firehouse) to keep it going.

By the way, if you stumble across the “lost” Mount Ross Bench Mark in your travels, it may be worth something. Apparently it was pried from the ground and stolen. It is currently on Cazadero’s “Ten Most Wanted List”.   On a side note, this protected 238-acre property is now open to hikers, offering the public a new outdoor destination with incomparable views. Get lost and wander the woodland paths, which hookup with the 5,600-acre Jenner Headlands Preserve to the south. Until next time, happy trails.