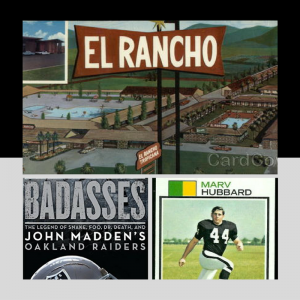 The night usually started by visiting 5 different bars.  The Music Box is where the prettiest ladies hung out.  Melendy’s was the nearest & most frequented.

As players, the Oakland Raiders had to break up the monotony of training camp in Santa Rosa.  You can’t blame them for that.  Also, they embraced their Bad-Boy image.  So much so that the furniture at one of the saloons would be stored in the back.  This was because of the fights that would usually accompany women-chasing and drinking.   One night Marv Hubbard, a block of a player at six-two & 240 pounds, rode his precious Harley to the saloon.  After settling in at the bar, Marv noticed two Hells Angels sitting on his bike.  Marv approached and an argument ensued.  Punches were thrown.  Marv clocked them both.  The bikers rose, dusted off their club patches and entered the saloon with their new drinking partner.