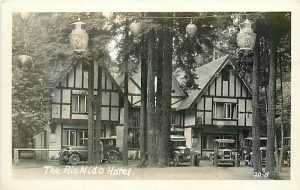 Claire Harris (who operated Johnson’s Beach in Guerneville for 48 years until 2015) remembers that the Friday night trains were crammed with tourists.  Those who came by car traveled by way of Forestville and Pocket Canyon, across the Guerneville Bridge and headed east on a narrow dirt road beside the tracks.

Harry Harris (Claire’s father) operated the hotel, nearby tent cabins and approximately 130 cottages.  The lodge featured an Italian cuisine with a cabaret lounge where piano keys clicked and the martinis flowed.  The attire was casual but no swimwear was allowed inside.  During the day, tables were set aside for card games such as Pedro (which originated in the Mission District of S.F.).  The last train out of the area was in 1935 but the fun kept rolling with the Big Band sound.  There was a “house band” in residence ($30 per week) and they ate in the dining room.  When Harry signed on with Music Corporation of America, it was not unusual to see the greats of the day playing unannounced at the piano.  Harry James tops the list but to everyone’s disappointment he did not bring his wife, Betty Grable, along.  Woody Herman, Ozzie Nelson, Phil Harris and others not only entertained the folks at the nearby dance hall but fraternized with patrons at the lodge.  It was a quaint place where for a short time you were able to coexist and be an equal with some of the great musicians of all time.

Brett and Yulia Gibbs traveled from Russia to the Russian River to purchase the eleven-room hotel. Have we come full circle from the days of Fort Ross in 1812?   We wish the family udachi (good luck) in their new venture.