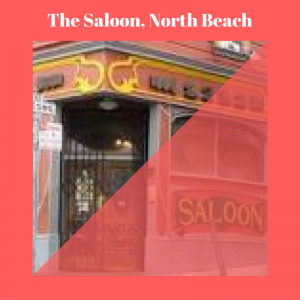 The Saloon was one of those places where easy targets were drugged, hauled up to the east side of nearby Telegraph Hill and imprisoned in one of the Filbert Step cottages to be shanghaied out to sea later.  The 1906 earthquake and fire destroyed most of the buildings in the area but not The Saloon.

During the 1906 disaster, a Navy frigate supposedly pumped water from the bay via a hose which was extended over Telegraph Hill to North Beach.  The Saloon and a wholesale liquor warehouse were examples of the few structures saved in the district.  Some have said that alcohol businesses received preferential treatment from the firefighters.  I don’t see the problem here.

During the sixties and seventies, Grant Street was known for its blues bands, playing music every night.  Over the years, The Saloon has hosted talented and sometimes famous musicians such as Johnny Nitro, Steve Miller and Etta James.  In recent times, it has been recognized by the Blues Foundation of Memphis for keeping the sound alive.  Try it out.