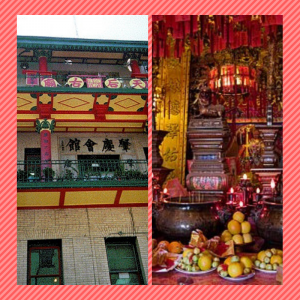 As you enter what feels like a secret passageway to some urban myth, authenticity abounds. You survey the walls of the stairwell lined with ancient sagas. These artworks and photos of history accompany you as you pass the second floor, labeled “Mahjong Parlors”.  Another two flights brings you to a place of prayer. The quiet demands respect with only the sound of  a devotee shaking a cup of kau cim sticks penetrating the stillness.  The person exchanges the one stick that has fallen to the floor for a corresponding paper with an answer to his/her prayers.

Massive gold-leaf woodcarvings adorn the ceiling, stealing your breath with its craftsmanship. Red envelopes and lanterns surround the nearby statues of deities. Offerings of oranges line the altar while the scent of incense prevails. Tin How Temple remains a sacred and almost secretive house of worship, an off-the-beaten-path discovery that is worthy of your inspection. Not a tourist trap. Sidebar: The temple was destroyed in the 1906 earthquake and rebuilt four years later on its original site. Due to a rejuvenation enjoyed by the institution of the Immigration and Nationality Act of 1965, the temple rebounded from a twenty-year closure (1955-1975).